skip to main | skip to sidebar

We STILL luv this Video!

This always puts a smile to mom's face - we hope you like it too!

Happy Wednesday
Mack
Posted by Mack at 2:12 AM

Now how's that for a fine WTF this mornin? Hilarious! we never saw that one.

That was SOME Sneeze!!!!

I watched it twice! Yuh, and both times I was sure I heard a crow cawing. Could that sound have possibly come from the wee little bear?

Oh LORD! That is one VERY loud sneeze from such a tiny fluff ball. BOLBOLBOL! Too hilarious! Thank you so much for sharing.

Too funny - we have never seen that before either - poor Mom was really startled.

I watched that so many times when it first came out - it's so cute!

It was a HOOOOOOGE Sneeze.

What a loud sneeze for such a little bear!

Love ya lots
Maggie and Mitch

We have seen this. It is the best video ever. Thanks for posting it
Benny & Lily

NAK and The Residents of The Khottage Now With KhattleDog! said...

I felt it here!

Puffy jumped back from the computer when we watched this! It was QUITE a big surprise from such a little guy! Thanks for the chuckle.

How are the plans for Paris going? Andy, are you staying out of mischief?

OOPS! Momma is REALLY slipping...she thought she had clicked send and was onto sending Sally Ann and Andy a note about their mommy's trip when she realized that she had run the two together...see why we can't leave her alone? sheeesh!

The crazy old bat loved it.

I could watch it 1000 times!
Happy Wednesday!
Kisses and hugs
Lorenza

Hey Mackers!!
Me's missed yous~
Funny video -
me sissy's were all like awwwww so cute -

heeheehee! that was so funny! me and asa and mama hadn't seen that video before. we can't believe how loud that little baby panda's sneezle was!! if mama panda had been drinkin' her morning coffees when the sneezle happened, she would have spilled it all over herself. BOL!

Thank you
I nevew saw this..what a cute video
That baby is the tiniest I've evew seen.
have a wondewful fwiday!
smoochie kisses
ASTA

Thanks for the laughs!!! That was priceless!

Oh, man! Good thing Mom didn't have her coffee cup in her hand!!! Actually, that would've been kinda funny, except it would fry the keyboard... Thanks for sharing this laugh with us!

Haha, I name that tiny panda "noise box".
I bet you and I were much bigger than him when we were that young.
I didn't remember sneezing that terribly loud, did you?

From the Lone Star State 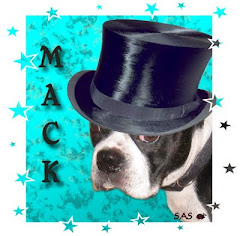 Come visit us on Dogster!

Mack
Hi I'm Mack, a 30 lb. Boston Terrier from Texas. I have two sissies, Lilly a chihuahua mix and Paris a pain in the butt cocker spaniel.